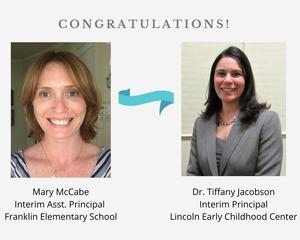 At its virtual public meeting on June 9, the Westfield Board of Education unanimously approved the appointment of Dr. Tiffany Jacobson as Interim Principal of the Lincoln Early Childhood Center and Mary McCabe as Interim Assistant Principal at Franklin Elementary School.

At its virtual public meeting on June 9, the Westfield Board of Education unanimously approved the appointment of Dr. Tiffany Jacobson as Interim Principal of the Lincoln Early Childhood Center and Mary McCabe as Interim Assistant Principal at Franklin Elementary School.

“While feeling extremely excited to lead and support the educational initiatives that will impact our youngest scholars, I am also immensely humbled by the awesome responsibilities which lie in orienting our youngsters with their first formalized school experience,” says Jacobson who will serve in the post from August 1, 2020 through June 30, 2021.

“Dr. Jacobson is particularly well-versed in early literacy skills and has a Reading Specialist certificate in addition to her advanced degrees,” says Superintendent Dr. Margaret Dolan.  “She is known and respected by the Lincoln staff and will fit in well. She also is the mother of young children so she knows first-hand about the complexities and joy associated with early learners.”

Among her responsibilities, Jacobson also serves as committee chairperson of the Diversity in Texts Committee, which audited existing district-approved ELA titles for themes and topics pertaining to inclusiveness, diversity, and equity.  She is working with the district’s instructional technology teacher to develop a digital bookshelf linking relevant resources for interactive read-alouds for children in grades K through 5, expanded the secondary school selections to challenge implicitly held biases, and curated suggested summer reading.  Jacobson has lent her expertise to several other committees as well, including the district Professional Development and Technology committees.

Before joining Westfield, Jacobson spent nearly three years in the Metuchen School District as K-12 Supervisor of Curriculum and Instruction and five years as a literacy coach in the Union City School District, where she also taught middle school English and social studies for five years. Jacobson also is an adjunct professor of education at Saint Peter’s University, where she received her doctorate in Educational Leadership in 2015.  While at Saint Peter’s, she also earned a Master’s degree in Education in 2005 and a Bachelor of Arts in Elementary Education in 2003.  Additionally, she holds a Master’s in Literacy Education from New Jersey City University, which she earned in 2007.

McCabe, a 4th grader teacher at Franklin, will begin her new role on July 1, 2020 through June 30, 2021. She began her teaching career in Westfield 16 years ago and is a graduate of Westfield High School and a long time resident.

“As a mother and a teacher, I am a daily witness to the vital role of a vibrant school community,” says McCabe.  “I am excited for the opportunity to serve as Franklin’s interim assistant principal, where I can lead teachers and students in the community that I love.”

McCabe also currently serves as literacy coach at Franklin for grades 1-5, a position she has held since 2017.  She models reading and writing lessons for teachers in grades 3-5, collaborates with colleagues to create district-wide elementary units of study, holds bi-monthly school meetings for teachers with focused literacy topics, and mentors new teachers, providing them with resources and helping with planning, instruction, and assessment.

“Mrs. McCabe is a poised and diplomatic leader who is highly respected and well-regarded by her students, their families, and her colleagues,” says Dolan.  “She will partner well with incoming principal Dr. Paul Duncan who is looking forward to working with her.”

McCabe’s committee work includes serving as a liaison team member at Franklin to meet with administrators on school-wide issues.  She also was selected to serve on a district-wide committee that analyzed state standards and created a standards-based report card for grades K-5.  McCabe was among educators featured in a district video on Social and Emotional Learning (SEL) as well.

Prior to her years in Westfield, McCabe was an assistant track and field coach for four years at Union Catholic High School and a 4th grade teacher at Holy Trinity School for two years.  She earned a Master’s degree in Educational Leadership from Seton Hall University in 2009 and a Bachelor of Science in Elementary Education in 2002 from St. Joseph’s University.

In their interim positions, McCabe will succeed Duncan who currently serves as Franklin’s assistant principal, while Jacobson will succeed Lincoln principal Audrey Zavatz who is retiring.