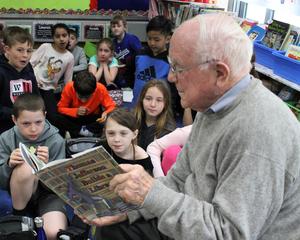 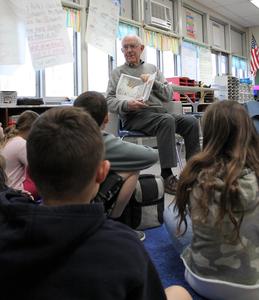 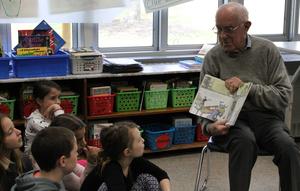 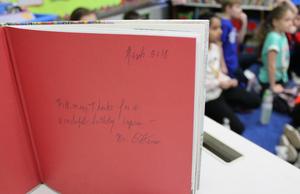 A special volunteer at Washington School has been reading to third graders each week for the past 12 years.

It’s a recent Wednesday and William O’Herron is reading “Thomas Jefferson Builds a Library” to third graders at Washington School.

“I visited Monticello. It’s Jefferson’s home,” O’Herron tells the students on April 18.  “I said ‘I read to children in the third grade’ and they recommended this book.”

O’Herron has been volunteering in Elizabeth Reilly’s class each week for the past 12 years.

“Mr. O’Herron has become a special part of the Washington School family, especially in my classroom,” says Reilly.  “He truly loves his time here and we feel the same way.  He brings something to the classroom that can’t be taught with a textbook or a computer.”

Inspired by his mother’s selfless example of helping others and by his grammar school teachers, O’Herron began volunteering to read to children at social service centers in the late 1960s while still employed as a regional manager for a division of Citicorp.  Upon retirement in 2001, the father of three and grandfather of 10 continued to keep busy as the co-chair of his college class at the College of the Holy Cross, a board member of the Westfield Tennis Club, an usher at the Catholic Church of the Holy Trinity.

But the Westfield resident says it is his love of the written word that propelled him to volunteer at Washington School.

“I like making them happy,” O’Herron says when asked what he likes best about visiting the third graders with a book in hand each week.  “I like helping them to learn a little bit about what’s going on.”

O’Herron says he reads primarily historical biographies for his own reading pleasure.  For the third graders, however, he chooses picture books and other offerings from the classroom library unless, as was the case on this particular Wednesday, he reads from a book he has purchased during recent travels.

“Jefferson wrote at least 19,000 letters in his career,” says O’Herron, reading from “Thomas Jefferson Builds a Library.”  “He told people what to read and when to read. ‘Science before noon. History until supper. Stories from dark till bedtime.’”

Reilly says O’Herron donates each book he buys on his trips to the classroom, adding “I make him sign every book that he gives to the class.”  Recently, the class threw their favorite volunteer a surprise party to celebrate his 86th birthday.